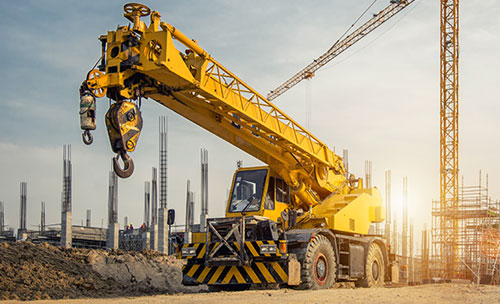 A tower crane is a piece of lifting equipment that is designed with a jib and a supportive tower mast. It is also connected with a trolley and a hook with the ability to rotate 360 degrees. This type of crane is assembled by connecting 3 different key parts that include the base, slewing unit, and the jib.

How do the tower cranes get to top skyscrapers?

The base of the crane is constructed using a concrete slab that ensures the structure is strongly secured in the ground. Some experts add steel beams to reinforce the structure to prevent any possibility of the foundation toppling. Concrete is poured to make a block that is approximately 30 feet by 30 and 4feet deep.

What follows is erecting smaller mobile masts from the base and when it reaches 180 feet tall, it is strengthened by the use of steel collars to enable it to withstand adverse weather conditions such as strong winds and storms. It takes several masts to construct the major crane. Separate Smaller cranes are used to build the main tower step by step because the masts are heavy. In fact, according to construction experts, modern tower cranes can withstand winds of up to 145mph meaning they can survive in hurricanes and Tsunami. The crane has a climbing area where builders raise sheath until it scales up outside the skyscraper with arms that holds and supports some segment that is bolt in. The climbing unit allows continuous addition of the masts. This process is repeated at every 180 feet and as a new section is added to make height taller.

There are 3 forms of operating a tower crane and they include; use of a keypad, joystick, and use of joystick that is developed into the command chair. The first two methods allow remote operation which translates the operator moves to the point where work is required to be done and with support of the signal person, accurate lifting and movements of loads are achieved. The system contains the start-up of the crane, horn, speed upload, right turn, left turn emergency stop among other relevant lever commands.